At about two years old, if you put a pencil or crayon in your toddler's hand and a paper in front of her, she will make marks, that though they may look like scribbles, are in actuality the first notations of her attempt to make sense of her world. There are few activities in the pre‑school years,and later through age eleven, as directly relevant to perceptual awareness as art making. In drawing, children are able to organize their world and give it shape as if by their own hands.

With little encouragement chil­dren will make drawings without number and in these artful compositions lies evidence of their increasing perceptual and cognitive awareness. Encouraging drawing early in the toddler years provides a head start because using drawing as a vehicle of expression takes hold and will be increasingly used.

In a fascinating study by Rhoda Kellogg of over a million children in all parts of the world, several discoveries were made. Not the least of these is that children have a natural aesthetic aptitude; that is, a sense of beauty and visual organization. When children as young as two and three years old draw, they place their markings in patterns on the page, which is to say they are aware of the space within which their markings appear. Their markings are made in a balanced way in relation to that space. It is a universal propensity of chil­dren to make these marks, to use the page or the sand or the wall (unless you stop them) to scribble and to create placement patterns with those markings. Now that science has made us aware of how much neural activity has already occurred in the womb and as infants, we should not be surprised by these instinctive talents. What we need to do is keep the rudimentary but magical materials of art ready for exploration. 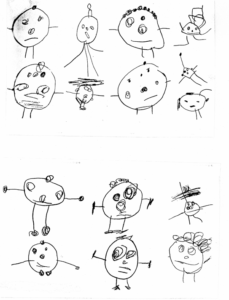 One of Kellogg's discoveries is that children are inspired and encouraged by their own markings. The mind/hand coordination that allows them to draw and the shapes that appear from their own hand are the incentives that keep them drawing. In doing so, both creativity and cognition are developed as they continue to explore. Later come the "recognizable" images of daddy and mommy that so delight us.

For other educational Books by Dr. Judith Peck, visit www.iapbooks.com.